Over the past several weeks, I've noticed an anomaly in my sofa bike (Tallboy LTc) drivetrain. Once per full chain rotation, there'd be a little skip around the cassette. I found a tight link. That was odd, I thought, as the chain had over a thousand miles on it. Chains get looser with wear, not tighter. I hadn't made any repairs during that time either.  I worked the tight link loose and didn't give it another thought.

Then a couple weeks later, I noticed a very subtle bump in the drivetrain when hammering in a smaller cogs. Running the chain through my hand on the bike stand, I didn't see or feel anything odd. Yet the subtle bump persisted. It didn't skip or anything, like it was earlier with the tight link. You just could feel something wasn't quite right in the chain. Then one morning before work, I was throwing some lube on and something caught my eye. A link was missing a roller! How does a link disappear without the chain breaking? It can't, the roller has to crack and fall off. Perhaps this was behind the binding link to begin with. Perhaps the binding stopped when the roller cracked and fell off. Then because the pitch of the chain effectively changed for that link, a small bump could be felt each time that spot came around the cassette.

I quickly swapped out a pair of links and was on my way to work. First time in 18 years of riding I've had that happen to a chain. It was a Shimano XT-level 10spd chain. I've had extremely good luck with Shimano chains over the years. My first drivetrain on the sofa bike went 3000 miles, and there was barely 1/16" "stretch" in that chain.
Posted by Hill Junkie at 9:12 PM 2 comments: Links to this post

It's been two years since I've been in to see my doctor and get a bone density scan. Since my ankle fracture in 2010, when I subsequently learned I had low bone density, I've altered my exercise routine, diet, and risk. If the machine data and study statistics are to be believed, I am many times more likely to break a bone in a bicycle crash than my peers. This is a sobering thought when one ponders how frequent fractures are in cycling to begin with.

I was hopeful, even confident, I would see some improvement, or at least no degradation in bone mineral density (BMD). I've been running for four years now. I've gotten little to no weight bearing impact exercise for most of my adult life before that. Then I added additional calcium supplementation, even though I doubt I've ever been deficient in my life. I added magnesium and D3 as well. It is quite possible I did not get enough vitamin D in winter months much of my life, living in northern latitudes. I've even cut out some of the starchy things in my diet, replacing bagels with nuts.

With T-scores typical of post-menopausal women, I greatly curtailed risk. I gave up road and traditional cyclocross racing. With an anticipated improvement in BMD, I thought maybe I could resume some road and CX racing.

When the report came back last Thursday, I was hugely disappointed to see all my numbers worsen. My spine, especially, is rapidly losing mass. The average T-score of my lower four vertebrae is now -2.0, which means two full standard deviations below that of a healthy young person. My Z-score, which is age adjusted, is -1.7. Each standard deviation equates to roughly 2.5x increase in fracture risk. So -1.7 means I'm 2.5^1.7 = 4.75 times more likely to break my back than an average guy my age. The new report format doesn't give individual scores for L1-L4, but my L1 was -2.2 last time and is probably less than that now. -2.5 is full-blown osteoporosis.

While my spine is losing almost 1% per year, my hips are losing much less. Maybe the running helps more with that. My hips are not as scary low, but still put me at much greater risk in a mishap than normal guys my age. 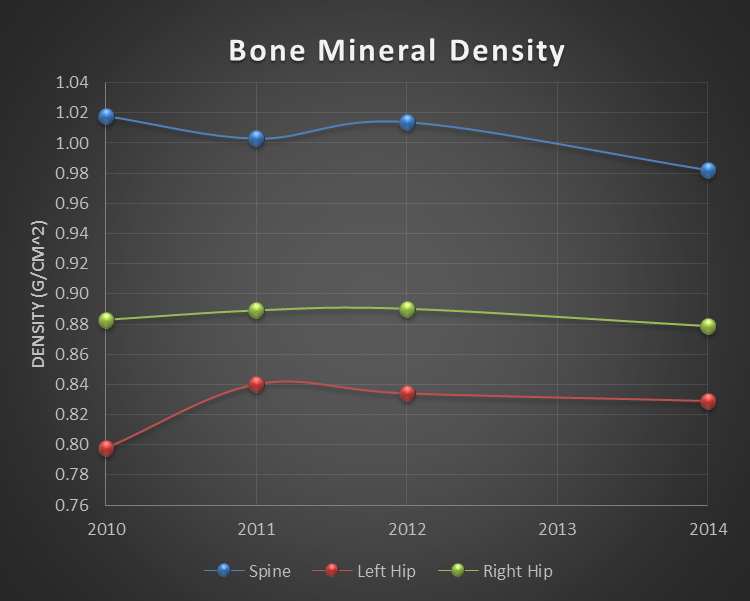 So now what? My doctor didn't think this was a big deal, but I haven't discussed these latest results in detail with him. I work with yields, reliability and statistical type stuff in my work. These odds freak me right out. I question whether anything I have done these last four years has made any difference. Would things be even worse if I hadn't made changes? I just don't have two populations of myself to run a controlled experiment.

My 10 year probability of fracture is probably not quite high enough yet to indicate drug treatment. That would be a choice I'd have to proactively pursue. The problem is, the fracture risk has to be pretty high because the drugs come with potentially nasty side effects. I don't think I'm ready to go there yet.

In poking around on the web to see what the latest drugs and research are showing, I discovered that a vitamin that is often deficient in American diet can have a profound effect on bone density. This is one of the vitamin K variants, K2, which has sub-variants MK4 and MK7. I take a multi-vitamin that has K in it, but it is K1. This is a pitfall of supplements. There are just too many nutrients in real food that you could never get all of them into a pill.

K2, or more importantly MK7, comes from green leafy things. I've consumed virtually no green leafy stuff my whole life. There's just no caloric value in it, This is a Fat Doug rule: good food has calories in it. MK7 is needed for proper regulation of calcium in the body. Calcium is a fickle mineral. You can take copious amounts of it, but unless you have any number of other minerals and vitamins along with it, you can't absorb it into the right places. Some studies have shown that taking a MK7 supplement not only slowed bone loss, it reversed it. MK7 is now used in Asian countries to treat osteoporosis. MK7 is widely available and quite safe. I'll give it a try. It would be far better to consume natural sources of MK7, but I don't think I could ever become a fan of spinach salads. Natto, fermented soybeans, popular in Japan, has a high concentration of MK7. Most Americans' palate can't tolerate the stuff though. The MK7 I ordered is derived from natto.

Unfortunately, it will be another two years before I will see if any changes I make have any impact. In the mean time I need to continue to curtail risks.
Posted by Hill Junkie at 6:43 PM 4 comments: Links to this post